In 2016, Microsoft considered but later declined the $8 million dollar purchase of Slack. Fast forward to later that year and a star was born. Microsoft Teams made its first official launch in November 2016. Today, Slack and Microsoft Teams compete head to head, but which is the better tool? Until recently, the main difference between the tools was that Microsoft Teams didn’t have a free premium version. However, late last year Microsoft rolled out a new tier of Teams available at no cost, shoring up its position as the main Slack competitor. 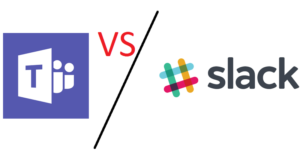 Is it Teams, is it Slack, or is there room for both? And does the recent news that Slack has increased its Office 365 integration to include Outlook and OneDrive change the picture at all?

Sure, email has its place, but with social media and messaging apps such as WhatsApp, Messenger and Snapchat, we’re becoming accustomed to fast, convenient conversation, often in our pocket for our personal lives. Historically in the work environment, 90% of communication is done via email. Slack and Teams are both aiming to change that. Both Slack and Microsoft Teams, put conversations and file sharing at the center of what they do. Organization happens within specific channels, as well as chats are threaded, an incredibly useful feature that allows you to easily see which messages are part of which conversation and who is replying to who.

Teams edges out Slack when it comes to its search tool. Slacks can only search the most recent 10k messages and only searches filenames and content stored within the platform. Teams can search through unlimited messages and can search within all files, folders, their contents and OneDrive. There is very little difference between Slack and Teams in terms of commands. Although, Slack is famous for ‘slash commands’. Slack also wins at the category of conversation threads based solely on the fact they include conversation threading in their private chat feature.

As part of an Office 365 subscription, sharing in Teams is excellent. Adding a file to a private chat will not only upload it to your OneDrive, but will share it with everybody else included in the chat. And when in team conversations, sharing works, but only through SharePoint. Slacks lags behind Teams since their sharing relies solely on the Google Drive. Chalk up a win for Microsoft in this category.

When is comes to Data Protection and Security, Slack doesn’t stand a chance against Microsoft. Slack had a security breach in 2015 and hasn’t taken many steps since them to become more secure. The data centers and security tools within Office 365 are unrivaled. Another win for Teams.

Slack can be deployed in a matter of minutes. Teams, due to its complexity, is a much longer process. With over 800 app integrations to Microsoft’s 180, Slack is the clear winner here. In the category of video and audio conferencing, Slack restricts you to just 15 participants in conferences, whereas Microsoft allow up to 80.

What shouldn’t be underestimated is Teams’ position within the Office 365 suite. If you’re an Office 365 subscriber with a goal of moving your communications more into the chat space, why purchase a Slack subscription when you already have Teams for free? Sure, there are a few categories where Slack wins over Teams, but those areas are minor. Don’t be surprised if Microsoft already has a plan in place to win in those category as well. 2W Tech is a Microsoft Gold Partner and has Office 365 experts on staff. Internally, 2W Tech’s business relies heavily on Microsoft Teams. Give us a call today to learn how we are using it internally and if it is a good choice for your business as well.

How Secure is Your IT Consultant’s Company?