Should You Be Using Microsoft Teams?

Microsoft has been making a lot of noise over the last couple years, notably with their Microsoft Azure and Office 365 products. Under CEO Satya Nadella, the software giant has practically won the cloud computing business, restructured its corporate culture and just recently surpassed $1 trillion in market value. Microsoft recently announced Teams is the fastest growing app in the company’s history. More than 500,000 organizations, including 91 of the Fortune 500 companies, use Microsoft Teams. 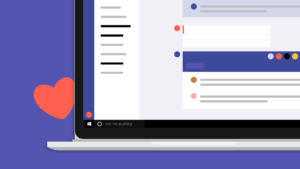 Microsoft launched Microsoft Teams in 2017 to directly compete with Slack. Two years later, Teams is already catching up and helping Microsoft move into the modern office. Slack, which launched in 2014 will soon go public, boasts more than 10 million users in 150-plus countries. More than 600,000 organizations use its tools. So which should you be using?

There are a few key differences between Teams and Slack, starting with their user profiles. Traditionally Slack was used more by small and medium-size businesses while Teams was typically found at larger companies. Microsoft is seeing their demographic shift to the small and medium-size businesses as they gain momentum. Microsoft also has been focusing on the non-traditional worker, meaning not the traditional desk worker. Teams offers customizations that let workers manage shift schedules or request time off directly from their mobile devices. Slack is not known to target the non-traditional workers as of yet.

With Teams, thanks to the integration of the Office 365 suite, you can access video, Outlook, and documents directly from the app. Microsoft Teams is positioned to take over the market from Slack due to their focus on collaboration applications that target specific processes, roles, and industries. 2W Tech is a Microsoft Gold Partner and has IT Consultants on staff that specialize in Office 365 and the Teams application. Give us a call today to learn in Microsoft Teams is the right fit for your organization.