Microsoft is celebrating the second anniversary of its Microsoft Teams launch and is currently up to over 500,000 organizations using this program. Microsoft made a strong business decision by bundling Teams with Office 365 subscriptions, making it an appealing choice for businesses that already pay for Office suite of apps. In celebration of 2 years, Microsoft has unveiled several new capabilities for its Teams collaboration tool including customized backgrounds for video calls, live text captions and integration with its Whiteboard Digital Canvas tool. 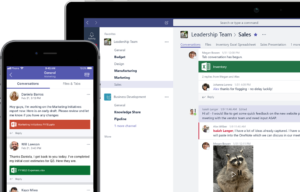 Microsoft is building on the feature in Microsoft Teams to add customizable backgrounds. This lets you join a video call and pretend you’re in an office, at the beach, or whatever crazy location you can come up with. The customized backgrounds feature will be available later this year and is expected to work with any image you choose.

One of the coolest new features developed is whiteboard interactions in meetings with remote participants. Microsoft has developed a way to mask out someone drawing on a physical whiteboard, allowing remote users to still see the physical whiteboard when it’s in use. You simply use a webcam to display the physical whiteboard and import it digitally into Microsoft Teams so remote workers can participate and see the whiteboard, later then archiving it for future use. Intelligent Capture processing can resize, focus and enhance whiteboard images and text, overlaying the information onto a video stream in real time. It is quite the advanced remote meeting feature. This feature is in testing and will be rolled out after testing is complete.

Live captions are also making their way to Microsoft Teams meetings, improving accessibility to allow participants who are deaf or hard of hearing to read speaker captions in real time. This is also useful if you’re working from a loud location, and you miss what a speaker says, as the captions will be displayed in the meeting. An English preview of this feature will be available soon, and Microsoft plans to include translation in meetings at some point in the future, too.

The last major new feature coming to Microsoft Teams is Live Events. This will allow Microsoft Teams users to broadcast a meeting or event to up to 10,000 people. Viewers won’t need a Microsoft Teams account to see the streams, and they’ll even be able to participate with live Q&As. It is meant to mirror Facebook Live but for work meetings and events.

In the last two years, Microsoft has been positioned as a core communication and collaboration tool within Office 365, effectively replacing Skype and Business. Microsoft is well on their way to making Teams the only collaboration tool you really need to make your own team function with total effectiveness. 2W Tech is a Microsoft Gold Partner and has experts on staff that specialize in helping businesses maximize their Office 365 investments. Give us a call today to learn how your team can be maximizing Microsoft Teams.