Microsoft Teams Gets its Own Apps

Microsoft simply can’t stop adding more to the Teams platform, continuing to make it dominant over all other collaboration tools. Microsoft Inspire took place last week as a virtual event where Microsoft announced that Teams now has its own internal apps. Is there much left Microsoft Teams doesn’t do? 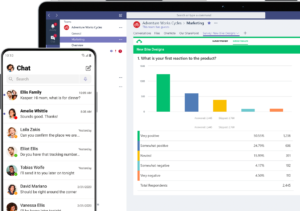 Developers will now be able to take PowerApps and integrate them into Teams. PowerApps are Microsoft’s tools for users to create their own non-coded web and mobile apps. Microsoft said this will allow developers to add features like Power Virtual Agents chatbots to Teams, which will provide AI assistant features to Teams chats. PowerApps will be available for preview in early August. Expect to see Power Virtual Agents capabilities preview in late August as well.

Teams-as-a-Platform is the latest concept from Microsoft and by adding this concept to the Teams base interface, it is further proof that Microsoft it going to push Teams to the top, and quickly. By adding apps as tabs or sidebars in Teams, this is mirroring a web app that can be opened inside of a browser. This step is unheard of from any other collaboration tool thus far.

Machine Learning on the Rise