Some say it is the most hated Microsoft product, some say it’s the product that refuses to die, some just simply call it Internet Explorer. Microsoft announced this week that it will end support for Internet Explorer 11 on June 15, 2022, finally. In the last year or so, Microsoft has stopped many of it’s products from working with IE, so the writing was on the wall. 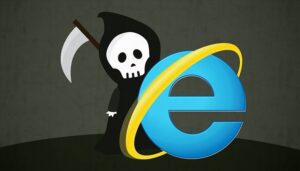 Once the most-used web browser, Internet Explorer had been on a steady downward trajectory for nearly two decades. When making this announcement, Microsoft said Internet Explorer is slow, no longer practical for or compatible with many modern web tasks, and is far less secure than modern browsers.

I would like to point out that IE has been around for 26 years, as it debuted in 1995 as part of Windows 95. In 2002, IE has 95% of market share. But Microsoft did something that was out of turn for them, they failed to innovate IE and slowly but surely, the browser worked its way to its demise.

The retirement doesn’t apply across the entire spectrum of Microsoft operating systems yet. IE11 is disappearing from standard Windows 10 editions but will continue to live on  in Windows 10 LTSC and in all current versions of Windows Server. For now, anyway.

Don’t worry Microsoft fans, even though we are saying goodbye to Internet Explorer, we still have Chrome and Edge. Microsoft Edge is a faster, more secure and modern browsing experience than IE, and it also addresses compatibility for older, legacy websites and applications, that IE was never able to do.

2W Tech is a technology service provider specializing in solutions for the manufacturing industry. We are a Microsoft Gold Partner and would be happy to discuss any of the Microsoft product suite with you.

China’s Version of GDPR is in the Works